From here, you can access the Emergencies page, Contact Us page, Accessibility Settings, Language Selection, and Search page. 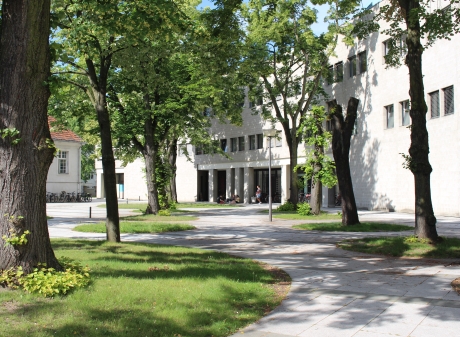 The Berlin School of Public Health (BSPH) brings together the expertise of three partner institutions:

About the Berlin School of Public Health

The Berlin School of Public Health (BSPH) was formally established as an inter-university organization in 2015 and consists of three partner institutions. Each institution is represented at the BSPH by professors and their institutes:

The BSPH serves as a hub for Public Health research and continuing education in the Berlin- Brandenburg Region. It offers a variety of master's programs in a graduate (consecutive) and continuing education (post-graduate) format. The educational mission is to train young scientists to tackle the challenges of population health in the 21st century. Each of the partner institutions offers undergraduate (Bachelor) programs that qualify for the joint consecutive Master of Science in Public Health degree program. It is also possible to earn doctorate degrees in the public health field through the BSPH partner institutions.

The BSPH is governed by a supervisory council and managed by a board of directors consisting of representatives from each of the three partner institutions. A scientific advisory board provides outside council. The BSPH administrative office is housed at the Institute of Public Health (IPH), Charité - Universitätsmedizin Berlin.

Fields of activity of the BSPH

Various master's degree programs can be completed at the BSPH, both consecutive and advanced. The mission is to educate and train young scientists to address the population health challenges of the 21st century in society as a whole.

Each of the partner institutions offers bachelor's degree programs that fulfill the admission requirements for the joint, consecutive Master of Science in Public Health. Doctoral degrees are also available through the TU and Charité.

Besides teaching, research is the second focus of the BSPH. The institutions involved in the BSPH each contribute their research expertise in this context. Regarding nationally and internationally visible public health research, the BSPH conducts bundled activities for Global Health in addition to Health Economics, with a particular focus on "Consequences of Climate Change" and "Health System Design and Universal Health Coverage".

Other bundled activities include Population Health Science, health services research, and population- and health systems-oriented policy and practice transfer. The strengthening and optimized interlinking of research and teaching characterize the content of the study programs.

In addition to the task of networking regionally with relevant actors, the BSPH sees it as its explicit task to do so nationally, Europe-wide and globally. The national networking is not only supported by the cooperation with the actors of the self-administration (G-BA, KBV, KZBV, DKG and GKV-Spitzenverband), but also by the membership in the German Society for Public Health (DGPH), the Association for the Promotion of Science in the Health Professions (VFWG), the Future Forum Public Health, at Gesundheit Berlin-Brandenburg and at the State Health Conference Berlin. At the European level, the BSPH is a member of the Association of Schools of Public Health in the European Region (ASPHER) and, above that, of the European Public Health Association (EUPHA).

The TU site of the BSPH is one of the three centers of the European Observatory on Health Systems and Policies, through which there is already 15 years of close cooperation with the World Health Organization, the European Commission, the World Bank and numerous national governments (including Belgium, Finland, Great Britain, Norway, Austria and Sweden) as well as with the London School of Hygiene & Tropical Medicine and the London School of Economics. There is also close collaboration with international partners in the form of professional events, such as Aldo Moro University in Bari (Italy), the University of Gothenburg (Sweden) and the University of Health Sciences, Medical Informatics and Technology, Hall in Tirol (Austria).

In order for public health to fulfill its claim to be "science and practice" at the same time, the BSPH must be relevant for practice (at the public health service, in municipalities and settings such as neighborhoods, schools, or companies) and for politics (at the international, European, national and regional levels). The aim is to create a reciprocal science-practice transfer and, on the one hand, to impart knowledge and, on the other hand, to take up questions and practical experiences.

Furthermore, the BSPH contributes to the networking of further events of participating institutions, such as the regular Spreestadt-Forum at the TU (MiG) or the Berlin Epidemiologic Methods Colloquium (BEMC) of the Charité (IPH) as well as further lecture series, summer schools, and intensive short courses.